When the sun goes down at Kuala Selangor, twinkling fireflies light up the berembang trees along the Selangor River. Experience the natural display on a tour from Kuala Lumpur that includes a boat trip, seafood buffet, and round-trip transport from your centrally-located hotel.

The fully air-conditioned vehicles will be manned by your own personal driver with pick-up times from 3.30 pm. Inclusive in the tour is a nice seafood dinner and the boat ride along the river in Kuala Selangor.

Sungai Buloh is a city and mukim in Petaling District, Selangor. The name itself means “bamboo river” in the Malay language. It is located along the Kuala Selangor highway. Make your way towards the Sungai Buloh exit from to North-South Expressway and arrive to Kuala Selangor.

Bukit Melawati or Melawati Hill is a hill in Malaysia near Kuala Selangor. Bukit Melawati is a popular tourist attraction. The hill overlooks the Strait of Malacca and has a lighthouse as well as the remains of the Kota Melawati fort. The fort was built in the late 1700s by Sultan Ibrahim of Selangor to protect against Dutch invaders but the Dutch captured it a renamed it Fort Altingburg. Sultan Ibrahim recaptured the fort in 1785 but it was eventually destroyed during the Selangor Civil War. To go up to Bukit Malawati, tourist can take tram or they call it the tourist train. Tourist train is only operational on weekends and public holidays from 9.00am to 6.00pm. If we visited on weekdays, we will drive our car up to visit Bukit Malawati. The tram ticket for adult is RM 5 and for children is RM 3. The cannons at Bukit Malawati This build because in the late 18th and early 19th century, Bukit Malawati is a stronghold of the Selangor Sultanate. In order to fight against the Dutch, Sultan Ibrahim built this heavily fortified fort. Poisoned Well Bukit Melawati The well contains water poisoned from a maxture of latex itchy bamboo shoots. Poisoned Well was used to torture traitors where they were placed inside the well with the water level reaching their chin. Seven Wells (Telaga Tujuh) at Bukit Melawati, Originally, there was a well which contain seven springs that were never dry even during the droughts. Now, only a few remain and the rest lay buried. Some visitors use water from the well to fulfill their vow. Kuala Selangor District Historical Museum:- Basically, there are many historical items from the reign of Selangor Sultanate such as old coins, armor, weapons, keris etc. Photography is not allowed inside the museum Malacca Strait The Strait of Malacca or Straits of Malacca is a narrow, 550 mi stretch of water between the Malay Peninsula and the Indonesian island of Sumatra. As the main shipping channel between the Indian Ocean and the Pacific Ocean, it is one of the most important shipping lanes in the world.

Formerly named Altingsburg Lighthouse, after a Dutch governor. Built in 1907 and started operating in 1910. Beautiful lighthouse on the top of bukit melawati, kuala selangor. It’s a good place to take photo. However, tourists are not allow to enter in the lighthouse.

Sri Shakti Temple rises majestically as a unique beacon of Hindu architectural excellence in Malaysia.Note: There are specific time only temple open and most of the time we just stop for photo stop only.

For maximum visibility, the best time to experience Kuala Selangor’s fireflies is slightly after 8pm on a clear, moonless night. Any later than that, and the fireflies may have found a mate, causing them to stop flashing. There are three places to catch this rare, natural phenomenon: 1) Pasir Penambang 2) Kampung Kuantan Firefly Park 3) Kampung Bukit Belimbing Firefly Park Note: on the day, as per whether condition, driver will decide which park to proceed. We will be visit only one location from below mentioned place.

Seafood Dinner Before the firefly boat tour, you will have dinner at one of the many seafood restaurants inside the park or near location. These restaurants are known for its delicious seafood dishes which is located near the waterfront. Your driver will take you to the best restaurant of that row.

Just 2.5km from Kuala Selangor Nature Park and Bukit Melawati, Pasir Penambang is a main starting point for firefly tours conducted by Asni Tours. This boat tour will let you see the fireflies hovering on the river in Kuala Selangor. It takes about half an hour to complete the tour while you’re in the middle of the tour the boat stops at a station where you can observe the light show. Start Time: 7.30pm (30-45 minutes) Boat: Speedboat

Your driver will transfer you back to your hotel and you will arrive in Kuala Lumpur around a proximity 9.30pm to 10pm after a wonderful and unforgettable tour. 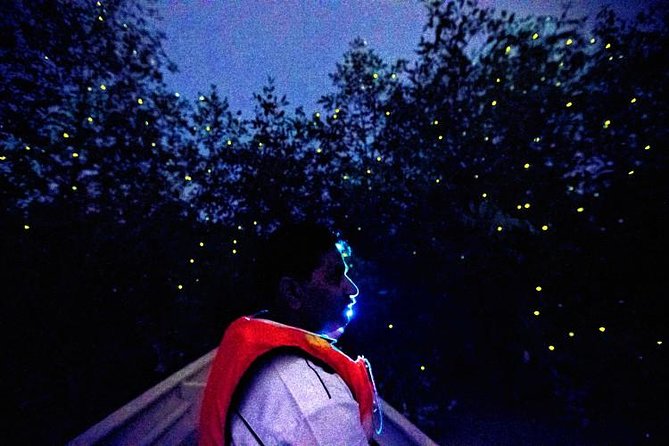